In early December 2019, doctors in the Wuhan province of China reported that they had identified a novel virus in a cluster of patients. They linked them to the Huanan Seafood Wholesale market nearby. They identified this virus as a mutant strain in the series of coronaviruses, so-called because part of the molecule resembles a crown when analysed under a microscope. Coronavirus is not flu, although it is believed to be spread via the same means of transmission (airborne droplets).

If you have turned on your television or radio since this time (or opened a newspaper, or spoken to a human being) then you may have heard of this coronavirus. I have asked by a few of you to weigh on the matter and therefore I will do so. Unlike the media reports I have seen so far, I will try to do so by simply identifying important facts and skipping superlatives. In other words, it is not my aim to tell you how much you should (or should not) panic but instead to lay out in clear English what we actually know so far. Then the decision on how much toilet roll to stockpile will be yours and yours alone… Let’s begin…

In Wuhan, the province where the virus was first detected, the case fatality rate was 4.9% as of 04/02. This is higher than all other provinces, and this is likely explained by the fact that 89% of individuals in China were diagnosed without any testing and this means that many individuals who have been counted as dying from from the coronavirus pandemic may not have ever had coronavirus. In short, we must question the value of any figures emanating from China, especially Wuhan, as we would with any figures produced without first obtaining evidence.

Around the rest of the globe, the official figures are substantially different. The headline is that, as of yesterday (7th March), there had been 21,110 confirmed cases and 413 deaths (according to the World Health Organisation). This accounts for the figure of deaths-to-cases ratio of 1.9% although, on the 3rd of March , the WHO reported a figure of 3.4% fatality rate. This larger figure must be taken with caution because it includes in the invalidated Chinese data and is based on reported cases (for a more in-depth discussion of the difficulty in generating a true fatality rate, see below).

The issues with accurate calculation aside, how does this figure compare with other infections that we are more familiar with? The WHO figures make for interesting reading:

Sex sells. Fear sells. But what about perspective?

As humans, we understand new concepts best in relation to similar issues that we already understand. So, let’s keep it as simple as possible and compare Coronavirus to those viruses that with good ol’ flu. The American CDC maintains figures on seasonal influenza and estimates that between 20,000-52,000 Americans has died of flu since October 2019. (NOTE: this is an estimated figure from the CDC; while it should therefore be taken with caution, it is important to use the CDC’s official figures on both flu and coronavirus if we are indeed to ‘compare apples to apples’). If we take the median figure – 36,000 – and extrapolate this to the world’s 7 billion population, this would see a total of 840,000 people per year dying from the illness each year around the globe.  As of 08/03, the official global toll of COVID-19 (which includes the suspect Chinese figures) stood at 107,936 individuals diagnosed with an official death toll of 3,665. A comparison between deaths from coronavirus and from season flu in the last five months is below: 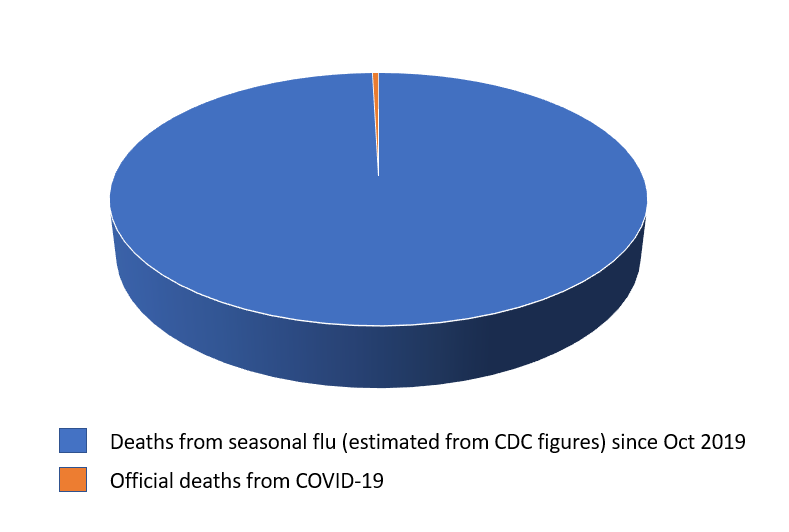 It’s fair to say that there is a big difference between the two figures. Huge, in fact. However, It is fair to point out that the flu strains that contribute to the global death toll from flu may have had a ‘head start’ on this particular strain of coronavirus, and therefore the death figures from the latter could increase once the natural spread of the agent reaches its natural zenith. The current ‘pandemic’ may get worse but it would need to become a lot worse in order for it to have the same impact as seasonal flu. Not a bit worse. Not even double. Not even ten times worse. 229,000x worse than it is right now.

This naturally leads to another sensible question: how much more widespread will this ‘contagion’ get? If we simply count the number of countries that have reported confirmed cases (104, as of 08/03), or count the total number of people that have been diagnosed with coronavirus thus globally (107,802 as of 08/03), it is pre-destined to paint a picture that is getting continually worse (there is no room for fair consideration of where things are getting better and where things are getting worse). This is an extremely illogical way to determine how ‘active’ the virus is; to form a fair perspective here, we should consider the number of current cases. And this peaked on February 19th (where official figures reached a global total of 58,622) and has since dropped to a current level of 42,328 (as of 08/03). The official figures make for a clear summary: fear may be increasing at a time when active cases are decreasing (note: this should not be interpreted as a claim that the global ‘active case count’ will not go through various explosive rises – this is inevitable as new territories see viral outbreak – but instead a demonstration of the disconnect between the available facts and media reporting). 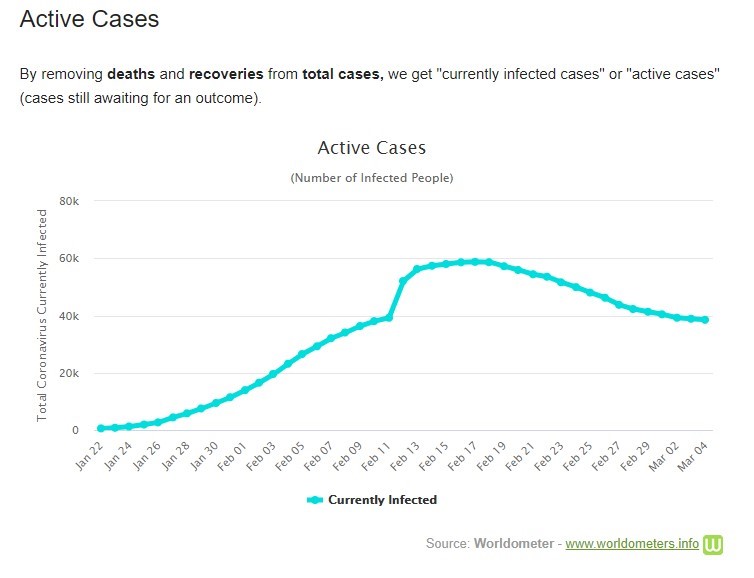 Of course, while the above figure goes some way to it is sensible to avoid boiling things down to just how many people have got it and how many people are dying. Because it is the nature of virology that we show varying vulnerabilities to the flu and respiratory viruses, it is sensible to consider who is at risk. And, as with the majority of other viruses (such as good ol’ flu), it is clear that the elderly and those already suffering from pre-existing conditions have an increased risk. The official figures were broken down by age group by Worldmeters.info and this is how they come in: 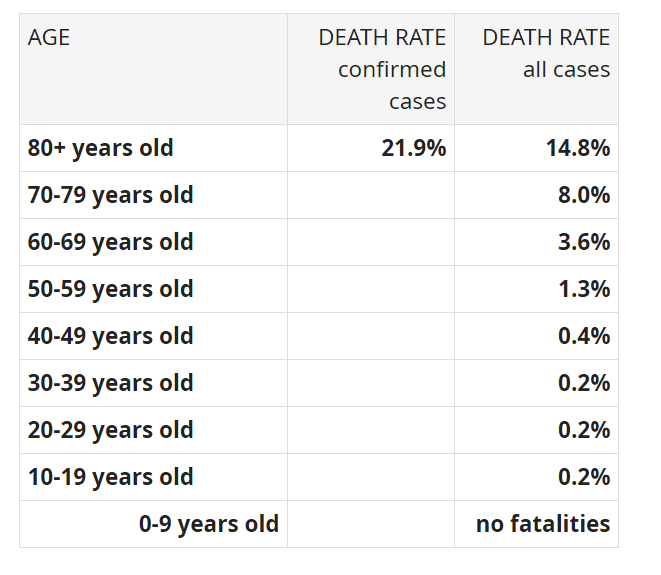 So the next time a discussion is raised about the need to close schools to avoid the risk of our children being wiped out, it may be worth considering that there is not yet a single report of anyone under the age of 10 dying from coronavirus, and the case fatality rate in those aged 10-19 stands at 0.02%. One could pose the question of whether children are actually resistant or whether they are instead ‘silent carriers’ of the virus and therefore able to pass it on to their grandparents (although initial research indicates that children do indeed appear much more resistant than adults). In any case, the figures indicate that schoolchildren are not at risk.

One thing that is rarely discussed is that coronavirus is not new, and has been causing mild respiratory disease for eons. However, in 2003, a novel mutation was found during the outbreak of SARS. This year’s novel strain is highly similar to the one of 2003 and it’s scientific name is actually “SARS-CoV2” (although I am not aware of any media outlets referring to it by this less-scary moniker). Equally, novel viruses are not new either. The US-based One Health Instutute has spent the last 10 years investigating ‘novel’ viruses that are blamed on the spillover that occurs following deforestation and similar ventures into novel territory. This 2019 strain of Coronavirus is just one of these viruses. One of 931.

The most sobering thought is this: the influenza virus continually mutates into new strains (which is the reason you can get it in successive years rather developing immunity) and we are continually exposed to new strains. Some are less virulent, others more so. In mathematical terms, it is nearly certain that humans faced multiple viral outbreaks last year that were more deadly (in terms of CFR) than coronavirus. And that this has been the case almost every year, since time began.

Early figures may dramatically under-estimate the number of people who have caught the virus and over-estimate the lethality. This is normal pattern with any ‘novel’ virus, due to the fact that we’d expect there to be lots of individuals who have contracted the virus and either a) only had mild symptoms or b) had no symptoms at all. These people do not tend to visit hospitals, meaning that the statistics produced come only from those who are more seriously affected. The combined effect of this means that many individuals who have caught the virus are not represented in the case count, but the ‘case fatality rate’ is calculated only from the more serious cases. The only way we can know exactly how many people really caught coronavirus is to undertake antibody testing on a population. This has not yet happened and, thus, we do not know what to make of the lethality figures. If it turns out that 90% of people catch this virus and continue with their daily lives without seeking medical attention, then this means that the lethality figures are over-stated by 10x.

We should also note that there are factors that could theoretically mean that the CFR actually goes up from the current figures. It is also impossible to calculate such figures on a ‘live’ basis due to the fact that complications/deaths can take an average of 14 days to occur following diagnosis). This means that it is flawed logic to look at current number of reported cases, compare them to current reported deaths and then divide the figures to produce a percentage (because people who were diagnosed yesterday may die in 13 days time). That is why, if you wish to make a fair calculation on the CFR, good methodology dictates that you go back in time to figures of several weeks ago. These figures are freely available for Coronavirus but there are discrepancies in the figures. One of the most widely-discussed discrepancies (in rational circles, at least) is the differences in case fatality rate in the Wuhan province versus the rest of China (as noted above).

There is no doubt that there is an important discussion to be had on hospital capacity and, in particular, the burden placed on intensive care units (as the figures above hopefully point out, we cannot accurately predict what sort of rise in demand we may experience but there is obvious concern over how throroughly unprepared the NHS is for any rise whatsoever – from flu, from coronavirus or any other outbreak). But so too on the value of inducing widespread anxiety across an entire population and, perhaps most heartbreaking of all, the damage that social isolation may have on the brain health of the elderly if we introduce a full lockdown. And yes, the economic concerns too… This is a serious discussion, one that involves wrestling with with many scientific and moral questions, but is best served when done from a rational basis. This process is not served by sensationalism.