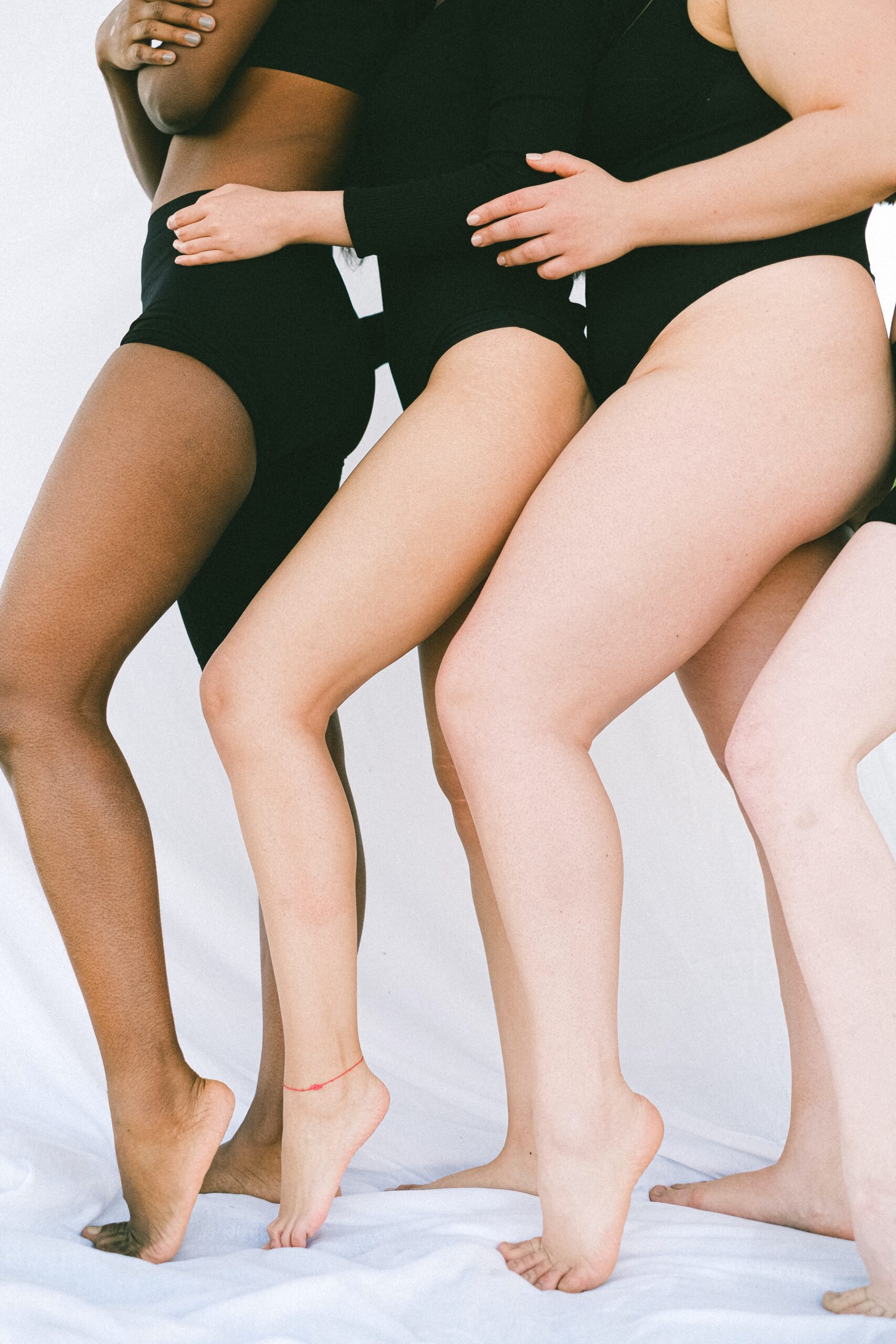 Through the estrogen receptors that are so densely situated in fat cells, estrogen promotes fat storage in sites beneath the skin. It does so by shutting down the cell’s adrenaline receptors (this will be important later), receptors that would normally sense the ‘request’ for circulating energy and release fatty acids into the bloodstream. However, this is not a uniform effect across all the fat reservoirs of the body, the altered receptor profile we found in visceral fat (around the abdomen) means that testosterone is the major hormonal driver of fat storage here and, through competing with this ‘male’ hormone at these sites, estrogen actually inhibits fat storage here. Conversely, it increases it around the triceps, buttocks, hips and breasts, with effects observed across all mammals studied.

I’ll set the scene. It’s the early-noughties and reducing estrogen had become The Thing To Do when working with females seeking weight loss. Gyms were separated into the trainers who were ‘estrogen-literate’ and those stuck in the past. Learning about the importance of estrogen was a milestone for those of us in the functional nutrition field; it was exciting to learn how intestinal balance could cause an increase in a chemical called beta-glucoridase, which interfered with the intestinal elimination of estrogen. Other papers showed DIM favourably altered estrogen metabolism and further research demonstrated that resveratrol had anti-estrogenic effects.

It quickly became gospel that one gave these ladies DIM, calcium-D-glurarate and resveratrol. You also avoided soy because ‘soy increases estrogen dominance’. There was only problem with this great advice; it rarely delivered results for the ladies I worked with.

Cue a deep dive into the science to see what I was missing…. There were some surprises in store. Turns out that removing estrogen receptors from mammals saw a massive increase in fat storage. That’s right… lowering estrogen made the subjects fat! My search dug up more and more papers that each struck a dagger into the heart of this otherwise beautiful theory. Turns out that, while there are important concerns with anti-nutrients, soy’s effects on estrogen may actually be beneficial. Equally, turns out that resveratrol could work as an estrogen agonist in some cases and a blocker in others. Among the complexity, one thing was clear: there is no one-size-fits-all approach to estrogen management.

The most important research paper I found was a Danish study that studied the density of the different types of receptors in the gluteal regions versus the abdomen. In short, that the gluteal fat cells had a high density of beta-receptors and the abdominal fat had very little. Importantly, whenever estrogen binds with the beta receptor, fat storage increases. This is found in multiple other studies (here and here). It is also relevant that activation of the estrogen-receptor beta can slow down mitochondrial energy production (with downstream effects across the body, most notably the metabolic rate).

So could the dual roles of estrogen be explained by the two different types of receptor? Yes. Estrogen receptor alpha has pro-metabolic effects, reducing food intake but increasing metabolic output (and therefore inducing a leaner body shape). It also encourages the formation of fat-burning brown fat over depot-style white fat and has adds to the effect of leptin at the hypothalamus, where it conveys a message of ‘energy safety’ that permits the usage of energy throughout the body. It also curbs the activity of a wide array of lipogenic enzymes. No wonder women with reduced activity in the alpha receptor store more weight at the abdomen.

Estrogen receptor beta is found all over, but in particularly high densities in the bone, cardiovascular system uterus, bladder and ovaries. As a side note, higher densities of the beta receptors are also found in the basal forebrain, hippocampus and cerebral cortex of the adult, areas that are heavily involved in brain activity (sharpness) and implicated in neurodegenerative diseases. This may explain why the classic phytoestrogens – those that bind extensively with the beta receptor – show benefits in cardiovascular health, bone strength and brain function but yet offer little to stem excess fat storage in my post-menopausal clients. Importantly for this discussion, estrogen receptor beta is found in high amounts in the thighs and buttocks, where it increases the uptake of fat from the bloodstream (this ‘sponge effect’ is why the average pre-menopausal woman, with her higher estrogen levels, has a dramatically lower cardiovascular risk and better lipid profile).

(Note: there are actually more receptors than just alpha and beta, but discussing the other adds nothing to the explanation at this point).

If we lose sensitivity at estrogen receptor alpha, the hypothalamus does not get the estrogenic signal it expects. In response, it increases the release of GnRH (Gonadotrophin-Releasing Hormone) to correct this shortage; the end result is that the ovaries are stimulated more than normal and estrogen levels rise. The beta receptors remain perfectly sensitive to the estrogen. Lots of binding occurs, so lots of fat storage occurs. Equally, lots of brain activity activity (to the point that sleep may suffer and the individual may feel some ongoing, low-grade agitation) and increased activity in sebaceous glands and uterine lining (which will be the subject of an upcoming article on endometriosis). Meanwhile, reduced sensitivity at the alpha receptors + increased delivery of estrogen = normal function at the hypothalamus. And the ‘only’ price to pay for restoring this balance was substantially increased fat storage at the areas rich in beta receptors (back of the arms, buttocks and thighs) and increase activity in certain areas of the brain and body.

What affects sensitivity at the alpha receptor?

The research discussed above makes it clear how the ‘classic’ estrogen dominance picture (high blood levels of estrogen, agitation/insomnia, increased fat storage beneath arms and at buttocks/thighs) can start from reduced sensitivity at the alpha receptor in the hypothalamus, and the subsequent attempts at compensation.

Therefore, provided that serious endocrinological disruption has been ruled out, we can expect great results from focusing on this alpha receptor (ER-a) and the elimination of any factors that downregulate its activity. The key factors here:

Clinical usage: how does the ‘alpha receptor technique’ work out on the frontline?

Theory is fine, but what happens in real-life when we apply this approach? I have been managing ER-a status for several years now, with support always consisting of what I’d call the ‘obvious/basic’ support (addressing results from initial Organic Acids test, considering any obvious calls to support adrenal output, sleep and digestion) together with a hop extract (one that provides a concentrated serving of 8-prenyl-naringenin, the only plant phytoestrogen that shows strong binding to ER-a). Overall, the responses have been pleasing.

In post-menopausal women (whose issues are not excess estrogen activity at the ER-b, instead simply low ER-a across the board), the responses have been more uniform but still show some divergence:

The literature and the frontline effects discussed above show how, when the factors that brought about the issues are resolved, the use of a hop phytoestrogen can help ‘reset’ the alpha receptor.

A 2012 research paper indicates that this ‘reset’ effect may be relevant even in women without high blood levels of estrogen, with particular relevance in those ladies who have:

This paper shows clearly how, once ER-b signalling is dominant, it actually upregulates local cortisol formation in the fat cells (which, due to cortisol’s effect in increasing expression of ER-b, can result in a self-perpetuating party of fat retention that is entirely local and therefore not reflected in blood/saliva readings of cortisol). At the time of writing (Nov 2021), I am still in the early stages of seeing how the ER-a management would pan out in clinic for these scenarios, but initial responses are encouraging.

Functional management of hormones is always a complex matter, and estrogen is no different. However, one thing that is obvious is how limiting it is to speak of the role of ‘estrogen’ on fat storage without differentiating between its opposite effects at the alpha and beta receptor.

Also obvious is how the fundamental mechanics of estrogen on energy management have been largely ignored by dogmatic professionals, despite the spectacular failings of these old, half-baked ideas and the growing body of evidence that reveals a system that is elegant, understandable and ready to employ on the frontline.

The evidence shows clearly that management of the estrogen receptor alpha is one of the most important aspects in turning off a cycle that could otherwise induce an ongoing obstacle and is capable of providing great results, but how these results can be expected only as part of a holistic approach that tends to all aspects of energy management of fat cells.